We all fail sometimes. The key to failure is brushing ourselves off and accepting our failure with dignity and the profound sense of pride that you at least tried. Then you can buy a cabin in the woods and start making bombs. Because it’s the thought that counts. The thought that with a little plutonium, “They will pay. Oh yes, they will pay.” Because we know that there are other fish in the sea, which is where people will have to live when you are done with….

I’ve written sketch comedy and even a feature length comedy film. I’d figure that I’d know what is funny. And I really thought I found the funny in an company iPad training. We were being instructed in the use of iMovie for the iPad. I’ve created some music videos for my band in iMovie:

The class instructed us teachers to create a presentation for the students using iMovie so if we wanted the students do a similar assignment, we would know what to do. This assignment was an opportunity for the comedy. I’ve always tried to insert humor into my education. If I didn’t, I would get bored.

I remember one of my computer programming teachers in high school told me I can’t name a variable Bob. He said other programmers wouldn’t know that Bob is the Fibonacci sequence. Aside from the fact that it was a silly high school project that no other programmers would look at, I began writing stories in my programs. Bob’s cloning machine exploded and he began to replicate himself in the form of the Fibonacci sequence!

Here in my adult life, I’m at it again. How can I take what would be a boring assignment and make it funny? My comical gears began to turn and I thought of a simple equation – one that I thought was the funniest thing on the planet.

So when we were given time to make our video, I whipped up a doofy little video for the project that I thought was hilarious.

While people did laugh during my presentation of the video, they didn’t laugh at the joke I thought was gold! Hamlet in Klingon is funny. Chuck Norris is also funny. Chuck playing Hamlet in Klingon –  a nuclear explosion of funny. That’s not to say the video wasn’t funny. The training group laughed during the video but they didn’t really laugh at the joke that I really wanted them to laugh at. 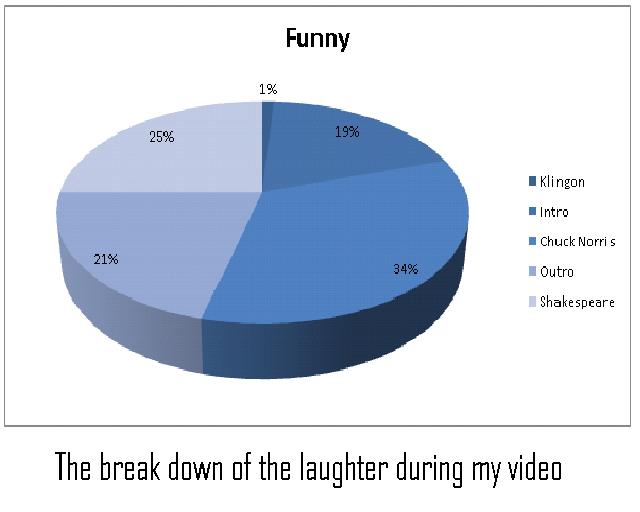 3 thoughts on “iComedy for an iStupid Sense of Humor”