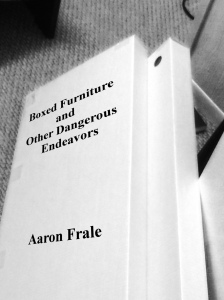 Furniture shopping can be dangerous with mystic forces and pent up sexual frustration.

“Furniture n’ in the Box,” Jeff said with a half-smirk.

“It’s not Furniture n’ the Box,” Stacy retorted. “It’s only the best store ever invented.”

“The 99 cent breakfast is only there to get you in the store.”

“Oh come on! You are the only person in the world who can fault a 99 cent breakfast.”

“It’s a gimmick. They give you breakfast, and you walk away with a box of furniture you have to assemble yourself.”

Stacy rolled her eyes and walked into a display apartment. Jeff passed a sign that read 497 square feet with some garbage about how there was room to entertain and live. Stacy walked up to a bed, wardrobe, and cabinet unit with a plethora of drawers and spread her hands out. “Storage! Look at all the storage,” Stacy said triumphantly as if she won the argument.

Her piercing blue eyes and green hipster skirt caught Jeff’s attention more than the storage. He adjusted his glasses like he often did around her to cover for the times when he was noticing her beauty. Even though Jeff and Stacy had known each other since grade school, she never thought about him like he thought about her.

“Sure, but what are the chances of me finding an apartment with exactly the same layout?” Jeff said determined not to give her the win. Stacy rolled her eyes and spun towards the bathroom. Jeff fixed his button up shirt and followed her into the fake apartment. His skinny awkward gate stumbled after her grace. They entered the display bathroom where she turned the knobs on the sink. “They aren’t hooked up. This is a store display.”

“Do you know how to tell when you really want something?”

“When you can’t stop touching it,” she smiled and walked into the kitchen.

The last part hurt. In all their years, she had never touched him. They talked all the time. He listened when she would tell him about some asshole she met in college. She talked to him about intellectual subjects she would never utter around a boyfriend. She shared every part of her life with him, expect what Jeff assumed was the most important part. He didn’t bother to look at the kitchen. He went right to the display sofa and plopped down next to a boy waiting for his mom.

The kid glanced at Stacy and then back at Jeff. Then he looked to his mom and then Stacy. Both were engrossed in looking at all the details of furniture they would never buy.

Jeff gave the kid an “I’m an adult who’s not paying attention to you look” and mumbled a response. The child got bored with Jeff and left him to brood. The boy played with a cardboard box with a TV printed on the front, and his mom swept him away before he began poking holes in the box. After an awkward moment where Jeff pretended to read the Swedish books from the display bookshelf, Stacy got her kitchen fix and joined Jeff on the couch. He didn’t look up from the book.

“I didn’t know you could read Swedish,” Stacy said.

“There’s a lot of things you don’t know about me!” Jeff snapped. Stacy backed away, and Jeff felt like an ass. Jeff put the book down and walked toward the showroom floor, but there was a problem with the showroom floor. It wasn’t there.