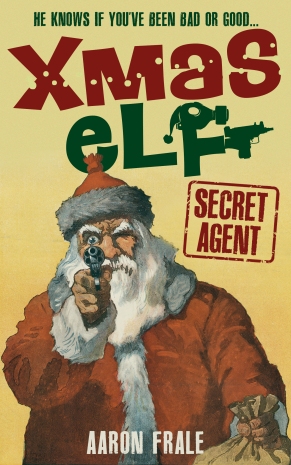 And we all know the old adage “Every time a bell rings, an elf gets his Glock.” This Christmas, get ready for a comedic romp through the underbelly of the holiday season where one elf learns that killing and torturing isn’t the only way to solve a problem. It will be available in paperback, audiobook, and kindle on Black Friday (11/23/18). Here’s a short description:

As one of Santa’s Elite Fixers, Jing spends most of his time waterboarding greedy toy manufacturers or responding to terrorists holding Rudolph for ransom. While not on the job, he relaxes in the North Pole, a paradise where he could forget all the killing and bloodshed and curl up to some Christmas music and hot cocoa.

Until a rogue group of elves betrays Santa and threatens what should have been a pleasant Christmas.

You can pre-order today! Thank you to all who helped me pick a cover! I appreciated all the feedback and considered all of it.

Also, did you remember to leave your review for Atmospheric Pressure 1 & 2? Reviews help out a whole bunch.

Last, but not very least, the first five stories of the Teristaque Chronicles will be on sale for 99 cents until 10/11/19 (US & UK only), and I’m also giving away the first story in the series for free in a group giveaway with many different authors giving their stuff away for free too.

Thank you for all of your support.