Today is your last chance to get the special Patreon members only edition of The Robin Hood of Couches! Thank you so much to all the folks who’ve already donated. Your support means a lot to me. You can secure your copy here on Patreon. If you want to skip all this Patreon stuff, you can preorder on Amazon here. 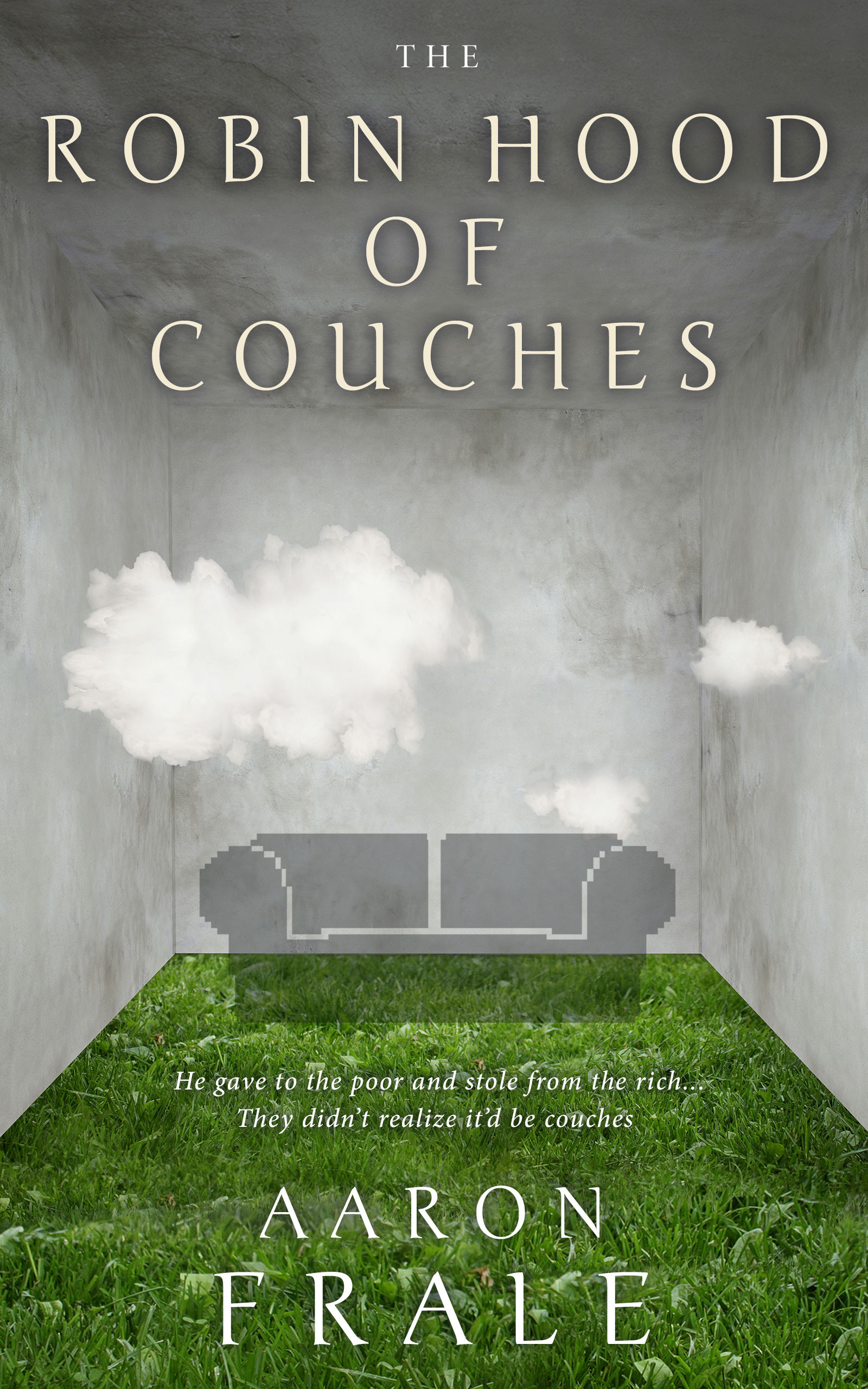 Thank you to everyone whose supported me already. Here is a sneak peak at the second chapter:

The Academy never prepared Reese for the smell of a body. It was a putrid, foul odor that was worse than the time he had found week-old leftovers from a steakhouse underneath the seat of his car. Since he hadn’t known what was inside the foil, he had unwrapped it and puked. The body of the man today festered in a drainage pool. The victim’s beard was matted and infested with bugs. According to the display hovering in the air in front of him, the DNA match was for Derrick Yusuf, a delivery handler for MotoCom. According to his supervisors, the man took a week off without giving a reason why before he died.

The local detective walked right into the display. Typically, it was rude to step into other people’s screens, but Reese had set it to private so no one could see what he was seeing. The cop poked at Reese and said, “Do you need to puke?”

“No, I’m fine.” Reese’s stomach had come a long way since the tinfoil surprise, but that didn’t stop the smell from making him lose his appetite for the rest of the day. Which was unfortunate because for lunch later on, his girlfriend treated him to this new Russian place with the best perogies in the city, and he didn’t eat a bite, claiming illness rather than recounting the memory of the smell with her.

“I’m surprised. All you corporate types puke your first time on the scene,” the detective said.

“Most of my colleagues are here to expose fraud and get big paychecks when they find the CFO skimming off the top. I’m here to find the truth,” Reese said.

“What? You didn’t get into Corporate Investigations for the finder’s fees and the big payday? If you want to make a difference in the world, you should come to collect the city paycheck with us.”

“Then I wouldn’t have access to the best equipment, and I couldn’t afford those subscriptions on a cop’s salary.”

“It’s the equipment, he says. Yeah, yeah, you’ll be driving your Maserati at the track on weekends. We appreciate the funding CI gives us but try to remember this is a crime scene. That body’s a real person, and don’t touch anything.” The cop walked out of the screen view, and Derrick’s information came back up. His crawler was now downloading social media info. Mr. Yusuf apparently liked to cure his own meats and made his own cheeses. It was an esoteric hobby when everyone’s entire house was a giant 3D printer these days.

The truth of the situation was that Reese enjoyed the tech available to even the lowest-level investigator, but it wasn’t the real reason he decided to attend the CI Academy, a school that only admits .07% of the applicants every year. He suffered through the sleepless nights of study, grueling physical activity, and endless skills training because he really wanted to make a difference in the world.

When the CIs weren’t driving their Maseratis at the tracks on weekends, they were making the world a better place. It was a high-profile CI who brought down the most notorious drug lord that made crime bosses of the past like Guzmán and Capone look like the awkward kid brother. CIs brought down an entire terrorist network that almost snuck a dirty bomb into the Olympics.

A lot of people criticized the CIs and said they were only out to protect their bosses’ payday, but no one ever mentioned that, by protecting corporate interests, the people’s interests were protected too. The cop wouldn’t understand any of it. He’d think Reese was a CI chasing another payday when the reality was that this new recruit cared just as much about solving the murder as the police did.

Since the victim had a couple of anomalous shipping discrepancies, CI was called onto the scene too. Despite the cop’s misgivings, Reese wouldn’t need to touch anything to find out everything he needed to know. Microprinted nanites swarmed the scene, scanning everything and uploading it to the CI cloud. They were spawned from a top of the line set of implants. The chip in his arm and ocular enhancer in his right eye were years ahead of what someone could get installed at the mall. In fact, the injections wouldn’t even be available to the public for another five years, and by then, CI would no doubt have upgraded him.

While the profile of the murder victim was being built, Reese swiped away his display and decided to snoop around the crime scene. It didn’t take a forensic scientist to figure out the cause of death. The man’s head was caved in with a blunt object. The wound was messy and created by many swifts strikes, as if the killer lashed out with rage. From the angle of the blow, the perpetrator was of average height.

From the looks of it, the body would have gone unnoticed for a while if a couple of kids hadn’t decided to race their sticks down the storm drain. According to the social media reports, the man didn’t have anyone close enough to report him missing. A few friends grumbled at him for standing them up, and a regular gaming group questioned why he didn’t show, but there were no police reports filed. From his phone and email history, he sparingly called home. CI was quick to submit the documents for the release of personal records, and it was even easier when there was a body. Reese was sure the local police didn’t even have email access yet.

There also didn’t seem to be much motivation in his social circle for his death. No one seemed to be more than lukewarm to him. That left the shipping reports that flagged CI to investigate the potential profit loss. According to the report, Mr. Yusuf was a lead handler for MotoCom’s automated shipping service, and his vehicles seemed to be expending more energy than they were scheduled to use, which meant that he was moonlighting and MotoCom wanted a cut. All cars were driverless, but robots were not quite ready to tackle the task of moving a package from the back into the unknown circumstances of someone’s home. So the driverless trucks would park outside a house, and the handlers would bring the box to the door.

The victim’s job was to sit in a truck all day and deliver packages when it stopped. Robots were no doubt already being conceived that could replace Derrick and his coworkers, but until the robotics companies could guarantee that a robot wouldn’t trample a kid playing in the lawn when it went to deliver a package, humans were still needed for deliveries, especially furniture. Derrick seemed to deliver a lot of it.
However, unlike driverless cars, which had the backing of many large companies to get them on the road, the multipurpose robot that could move a couch didn’t have as many industry giants because the real money was in digital property. Since all buildings constructed after a certain year had 3D printing technology built into their very walls, companies had been selling people the right to use their designs for a subscription fee.
Because objects could materialize from the 3D printers in the walls of most houses, the act of shopping every week for the latest fashion had become an antiquated thing. People really didn’t own anything anymore. The stylish handbag was the digital right to reproduce that handbag. As soon as the owner canceled their subscription, they no longer had the right to produce the purse, so the 3D printers would strip it down atom by atom and use the material for whatever active subscriptions were there. It was the ultimate in recycling.

Since most people 3D printed everything in their lives, Derrick’s job was a niche industry. The other odd part was that people very rarely had furniture shipped. People who kept the shipping industry alive did it because they would insist that 3D-printed wine didn’t taste the same, or wanted a printed book signed by the author with the assurance that the author’s hand really did touch that page. The bulk of shipped items consisted mainly of small objects that a collector or an enthusiast would pay absurdly high prices for in order to prove that its molecules weren’t stacked up by a 3D printer.
A collector wanting furniture that didn’t come from a 3D printer had to have deep pockets. Derrick bought wine from a vineyard once as a gift for his girlfriend, and it was the most expensive thing he ever purchased in gift form. And in all honesty, when his girlfriend wasn’t looking, he had the same wine 3D printed and could not tell the difference. He thought that the whole shipping industry was a gimmick to squeeze money out of wealthy people.

However, the furniture deliveries didn’t add up. Derrick delivered to many different addresses and never the same one twice. Each delivery was to a different name. Even an enthusiast wouldn’t have that many alternate identities. The only possibilities were that the mystery person was paying a new person every couple of days to receive the furniture and then coming to pick it up later, presumably to hide its final destination, or the person was laundering money, and most of the shipments were fake. It was a possibility that Derrick doctored his reports and got a payout for no delivery.
However, laundering money in the shipping world was pretty complicated. Since the truck had an internal scale that would track the weight coming on and off, Mr. Yusuf would have had to hack the system and trick the onboard computers into believing that furniture was being delivered, in addition to paying off all the movers under him to corroborate the story. The furniture was loaded on the truck at one of the mega-warehouses that were initially constructed by Amazon. He’d have to do some digging to see where the furniture came from because the mega-warehouses were the world’s largest middlemen.

Reese was sure the crime and the massive influx of furniture had to be connected. Even though he wasn’t supposed to investigate the murder, he knew he’d be the one to figure it out. If he could leave the world a better place than he had inherited, then he could count his new job as a win. The first step would involve checking out the last shipment Derrick ever delivered, an apartment full of furniture to a Tyrell Bryant.